A multi-year effort to build a Republican voter base in Chicago can be decisive because:

∙ 21% of the Illinois population lives within the borders of the City of Chicago;

∙ No Republican statewide candidate has ever lost with just 20% of the vote in Chicago, meaning that with over 20% Republican vote in Chicago proper, the offices of Governor and US Senator can flip, and Illinois goes into play in Presidential elections;

∙ Millions of dollars are sent from uncontested races in Chicago to contested  races elsewhere in the state that can be kept home to oppose effective Republican candidates.

The initial results of the Project in the 2020 election have been very promising:

∙ President Trump’s vote in Chicago jumped by 34 percent over his 2016 total, with a 27% increase in vote percentage;

∙ The Republican candidate for Cook County State’s Attorney received over 29% of the vote in the City in 2020, winning nine wards;

∙ In the Southwest Side of the City, a long-time conservative Democrat bastion, Republicans won the 19th Ward in races for Cook County State’s Attorney and  the 3rd District Congressional seat. 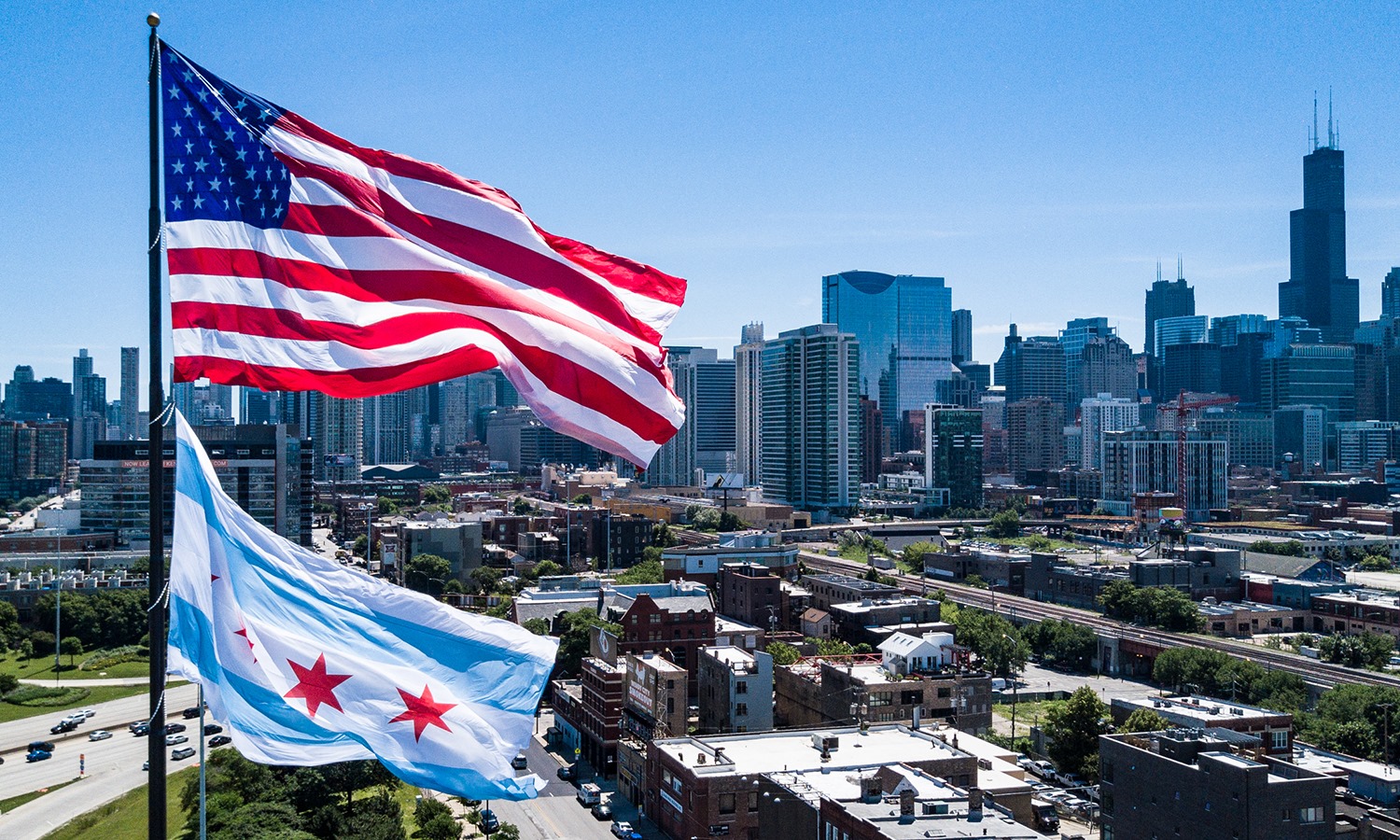 The Project has multiple goals:

To achieve these goals, the Project is a three-year program with emphasis on three general topics: People, Press and Policy.

The People aspect of the Project has direct goals: increase of volunteer lists and  participation at the ward and neighborhood level while expanding the reach of GOP  information and policy points. Given 50 wards, of widely varying Republican support  and leadership, relying on 50 “ward organizations” was impractical approach. Instead, a regional grouping of wards into Republican “clubs” provides the concentration of money events and planning to attract Republican volunteers and raise the profile of the GOP. Volunteers can be referred to their own wards for work with their own Committeeman  and Ward organizations will continue to encouraged. But the Clubs also allow a more  concentrated approach to campaign work across entire sections of the city, while  providing volunteers with the confidence that many volunteers are working with them on projects, not just a few in a Democrat sea, and allowing Chicago GOP to expend money  and time on campaign work in the most efficient manner.

∙ Establishment of staff and distribution of authority, including an Executive Director and Directors in six areas: Communications, Finance, Field  Operations, Ballot Security, Policy and Events.

Update: Done. Staff Positions have been filled with competent and  proactive people. There are monthly Staff Meetings for the staff to come together as a team to review progress, problems and possible solutions.

∙ Chicago is too big and diverse to address as a whole, and all politics are  local. Therefore, we are establishing and maintaining Republican clubs on  the Northwest Side, North Side and Southwest Side, using local events with speakers to build a volunteer base for campaign efforts and to spread  Republican messaging on issues.

Update: In Progress. The Northwest Side GOP Club has been successfully operating for years, based in the most Republican section of  the City. The Southwest Side GOP Club is also in operation, where  conservative Democrats are a ripe for GOP pickup. The Northside GOP  Club has now commenced operations and held a successful first event,  with over 200 registering and 150 attending.

Update: Partial Completion. The South Side Republicans are now in operation taking a different approach, which is “bottom up” rather than “top down.” Instead of trumpeting the GOP handing out titles and appointing Ward Committeemen, the “South Side GOP” is conducting town hall and listening events in Black neighborhoods, run by Field Organizers, not appointed Committeemen, developing trust and Republican responses to community concerns, such as crime and economic development. Only when a sufficient level of community trust and communication has been developed will South Side GOP “turn the lights on” as a full-fledged GOP operation. With the South Side club now up and running, Chicago GOP is turning to a similar process in neighborhoods of the West Side, potentially forming a  West Side GOP.

∙ Contract with professional voter data management and organizational development, given a city of 2.6 million.

Update: Done. Contract signed with Surus LLC, covering the operations  of the Northside GOP Club as a “shakedown cruise” with other clubs and areas added on a modular basis as money and personnel allow.

∙ An annual Chicago Lincoln Day Dinner with a major speaker, seeking to  make the dinner a major political event within a few years.

Update: In Planning. We believe that the Republican Party both in Illinois  and Nationally needs to start making a strong statement in the deeply troubled city of Chicago, pointing out the terrible results of Democrat urban  governance and seeking urban governance on Republican principles.

The Press aspect of the Project has direct goals: increase the Republican profile within  the city while gaining new opportunities to present Republican analysis and proposals  on city issues.

∙ Recruitment of a Director of Communications with full responsibility to  conduct press and other communication efforts.

Update: Done. The new Director has been doing an exemplary job. Our  Facebook and Twitter accounts have rising readership and “follows” and provide timely and cogent copy on current events.

∙ Sustained and pointed assertion of the Republican viewpoint in the press, routinely issuing press statements and Op-Eds.

Update: Successful and continuing. Through our Director of Communications, the Chicago is building a reputation in the press of not  just complaint, but factual support, and proposals for change. Our press  list of emails is now well over 300.

∙ Aggressive use of social media.

Update: Done and in use. It allows posting of messages and (soon) videos, while having updated buttons for volunteer, candidate recruitment and donations. With the website done, Chicago GOP is now starting a concerted low-dollar campaign by issuing gifts for various donation levels. Given the large number of Republicans concentrated in the city, a low dollar campaign can be effective.

Update: In operation. Chicago GOP has partnered with a local producer for podcast shows to promote the party and its message in Chicago.

Update: In planning. Chicago is a city of many local billboards and we  are planning a campaign of using those billboards to promote Republican themes aimed at convincing conservative Democrats to cross over, at  surprisingly low cost.

No urban Republican Party can succeed by mere complaint about conditions. Instead, positive, sound and even radical proposals for governmental change are required. In Chicago, policy proposals are being developed, both to establish the credibility of the Republican Party on Chicago issues and to present voters with strong alternatives to  the currently failing Democrat-controlled regime, looking forward to the February 28, 2023 Chicago Municipal Election when the Mayoralty and all 50 Aldermanic offices are on the ballot. While the Policy aspect of the plan was put on hold as the People and Press aspects were prioritized, with those programs moving ahead the Policy program  has begun.

Update: Done. The new Director has already submitted a timeline for  formulation of a Republican platform for the 2023 election that will include dramatic reform proposals on the distribution of power, the current  pension crisis in Chicago economic development and the explosion in street crime.

∙ Formation of a Policy Committee and recruitment of knowledgeable membership.

Update: Done / Ongoing. Initial members including a former Democrat  Alderman, the head of a major policy think tank in Chicago, and the co author of a major work on reforming the structure of power and government in Chicago.

∙ Use of protests and demonstrations to focus attention on key issues.

Update: Street protests were conducted in the 2020 campaign and against  corrupt officials. The protest aspect needs reinvigoration.

∙ Connection with conservative and libertarian think tanks for data and policies.

Update: Done. Chicago GOP now has strong communication channels with most of the major conservative think tanks in Chicago.

∙ Assertion of proposals for new governmental policies and structures to put the  distribution of governmental power in Chicago on a modern footing, including  a Chicago City Charter.

Update: In progress. The new Policy Committee is starting work on current issues, such as crime and the remapping process for Chicago  Wards, as well as a platform for major change to be presented in the 2023  election.

∙ Using speakers, forums and press to establishing the Republican Party as a voice for reform in the city;

Update: Future work. As policy proposals are established, the podcast series mentioned above will shift from “meet the GOP” to policy issues.

Update: Future work. As policy proposals are established, the podcast series mentioned above will shift from “meet the GOP” to policy issues.