State lawmakers: Abandoning Republican principles is not a winning strategy for Illinois’ GOP

is not a winning strategy for Illinois’ GOP 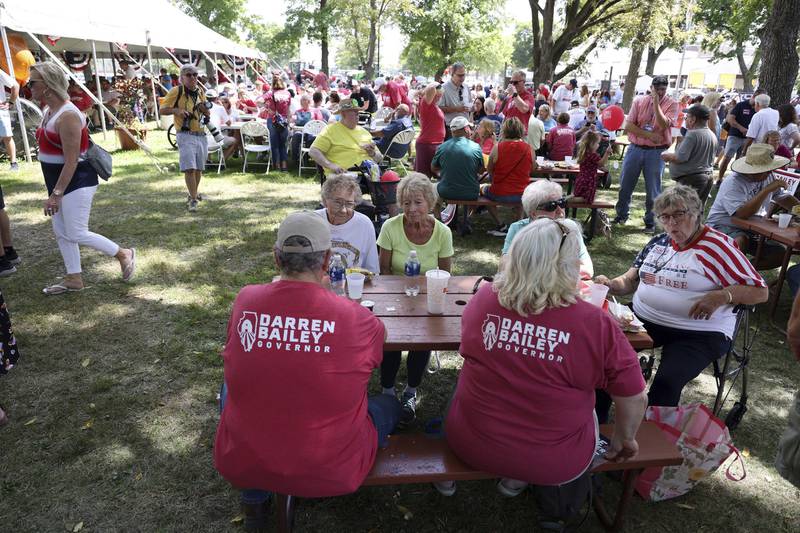 This year’s disastrous election in Illinois has sparked a fierce debate within the Republican Party, and predictably, the party’s left flank is blaming conservatives for its demise.

Devoid of evidence or data, they are declaring that conservatives are to blame for the GOP’s losses in November. They claim our party needs fiscally conservative and socially liberal candidates to win, but they forget we have already been down this road. As much as Republicans would like to forget, there was a gubernatorial candidate named Bruce Rauner on the ballot in Illinois in 2018.

He fit the establishment mold. He was a card-carrying member of the country club, claimed to be a fiscal conservative and was a social liberal, and yet Rauner’s vote total of 1,765,751 in 2018 was nearly identical to the 1,728,204 votes Republican gubernatorial candidate Darren Bailey received this year. Interesting, given that overall, there were nearly 500,000 fewer voters who voted this year than in 2018, but Bailey still received nearly the same number of votes as Rauner did in 2018.

Republicans arguing for fiscal conservatism and a liberal social agenda are largely the same Republicans who voted to raise the income tax, double the gas tax and do nothing to stop harmful overreaches such as Amendment 1 from passing. Is there really any evidence that these politicians have ever done anything but pay lip service to fiscal conservatism?

Suburban Republicans are not only losing state elections; they are also losing at the local level. This is a trend that predates Bailey and even Donald Trump. Contrast that with downstate, where we worked hard to flip our counties from reliably blue to ruby red. Perhaps suburban Republicans should be doing more self-reflection on how they have lost the support of their voters over the same time period.

What Illinois needs is leadership. Politicians who won’t defend their values are uninspiring, and we should not be surprised when they lose elections. The solution is not to abandon Republican values and principles but to defend them. Show the voters how our values and policies translate into more opportunity and a higher quality of life for every citizen. If our leaders don’t defend our values or articulate a vision — why should voters care?

We do not contend that conservatives should be completely held harmless for the election debacle this year. Conservatives need to understand that being right on the issues does not alone make a candidate best suited to win. Electability, capability and political talent are also essential ingredients to be politically successful in a state like Illinois.

There is a path for Republicans to keep rural voters and win in the suburbs. Gov. Ron DeSantis has been doing it in Florida for four years. He stands alone as the only Republican at the national level who did something about school closings, gender ideology and progressive policies that were being forced on students and businesses. DeSantis won big because he strategically and specifically pushed back on far-left extremists. He clearly outlined his beliefs and defended them vigorously, and his party and legislature in Florida backed him up. He did not fold like an Illinois establishment Republican. He presented a vision and a plan and governed boldly, and he won in places Republicans have never won before in Florida.

This is possible in Illinois, but it is going to take candidates who won’t run away from the tough issues that Democrats are pushing to the extremes. It is also going to take a change in attitude from our party’s leaders. The arrogance and condescension displayed at the recent State Central Committee meeting is illustrative of how far we need to go to unify our party. People who gave their time to knock on doors, attend rallies and put up signs to get Republican candidates elected were treated with disdain when they drove hundreds of miles to attend this meeting and express their points of view. This is unacceptable.

The base of our party is tired of being ignored. Yes, we need donors to get our message out, but more importantly, we need an actual message. The path to victory is not finger-pointing and playing the blame game but rather unifying around the basic principles of individual liberty, limited government, free market economics and a respect for life and our Constitution that defines our party.

State Reps. Chris Miller of Oakland, Blaine Wilhour of Beecher City, Dan Caulkins of Decatur and Brad Halbrook of Shelbyville, along with Rep. Adam Niemerg of Dieterich, are members of the Illinois Freedom Caucus. These General Assembly members advocate for limited government, lower taxes, and accountability and integrity in government.