Who is Saint Patrick and why is he celebrated in Chicago? 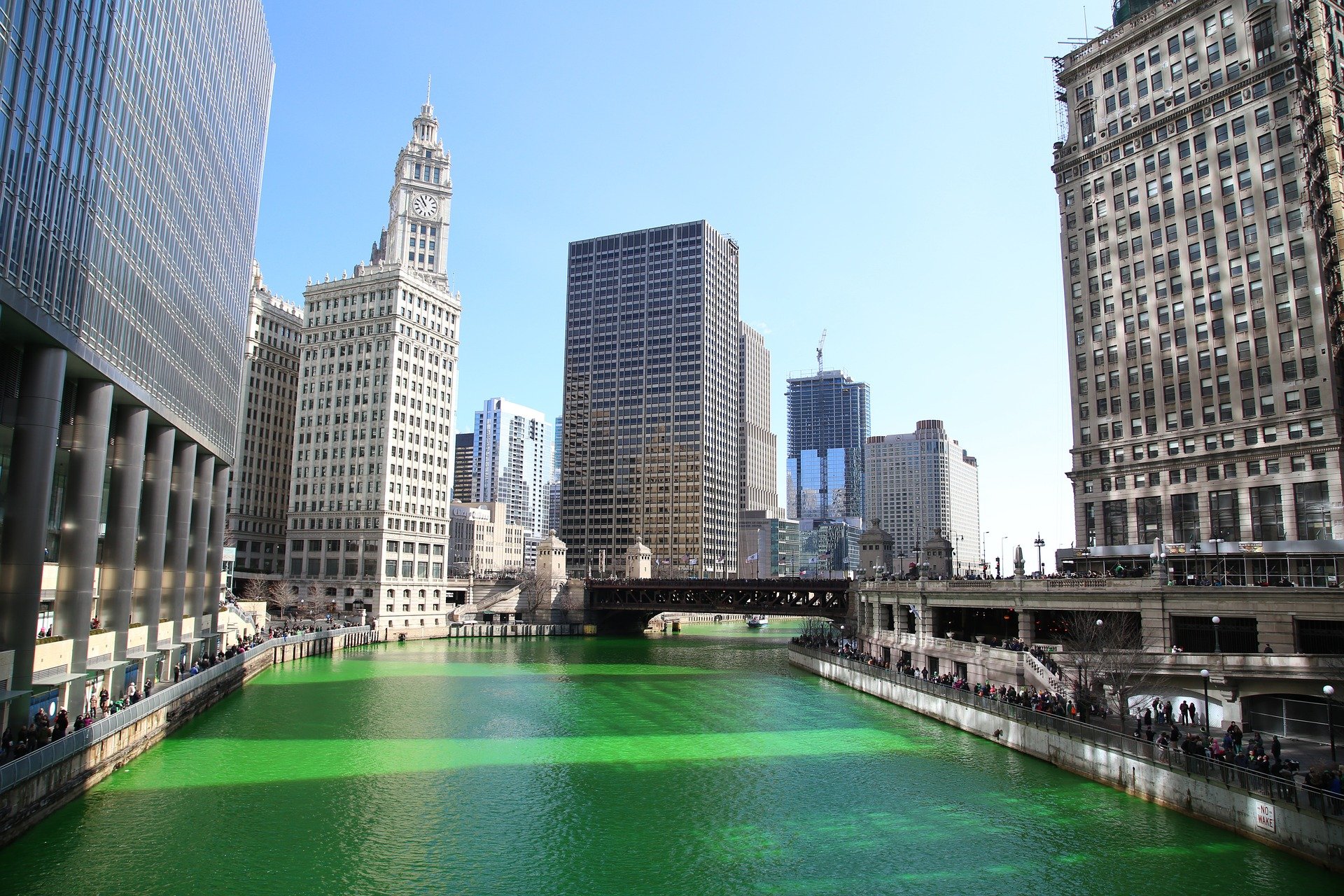 Every year millions around the globe mark the feast Saint Patrick’s Day on March 17th. A religious feast to observe the work of Saint Patrick, the day has grown to become an international festival celebrating Irish history and culture and is the national holiday for both the Republic of Ireland and Northern Ireland.

Since the late 17th century, when the first Saint Patrick’s Day celebration was held, people all over the globe take part in lively revelry which includes eating Irish food, dancing, wearing in emerald-green clothing, dressing as bearded Irish fairies (leprechauns), and wearing the symbol most closely associated with Ireland and Saint Patrick, a shamrock. A global celebration, today more than 400 landmarks in over 50 countries briefly turn emerald to pay tribute to Saint Patrick on March 17.

The question remains: Why does Saint Patrick enjoy such immense popularity above many other saints, and what is his appeal to Chicago?

Though his birthdate is the subject of debate, reliable history has documented Saint Patrick was born Maewyn Succat in Roman Britain sometime in the late fourth century. Abducted by Irish privateers and forced into slavery in Ireland at age 16, Patrick escaped bondage and returned to Britain six years later, convinced his enslavement was a consequence of his faithless early life. Like Saint Paul, who experienced a conversion on the road to Damascus, Patrick believed his religious faith had developed and strengthened while a slave laborer and he believed he had been called upon by God to Christianize Ireland. Adopting the name Patricius, Latin for “father figure,” Patrick would return to Ireland as a missionary.

While history has recorded Patrick as a miracle worker, sagacious politician, and the man who banished snakes from Ireland, the spread of Christianity across Ireland is mistakenly attributed to him. Although Patrick did contribute to the spreading of the Word, well in advance of Patrick’s arrival in Ireland, Irish maritime raiders were known for harrying settlements on Roman Britain’s western seaboard and returning to Ireland with spoils and British captives to be auctioned into slavery. These British prisoners were known to bring their Christian faith across the seas with them. Moreover, in AD 431, Pope Celestine I dispatched the nobleman Palladius to Ireland. A bishop, Palladius’ purpose was to minister to the Christian Irish population and build on the foundation laid by Saints Ailbe and Declan, both of whom proclaimed the Word and built monasteries and churches. Though Palladius, Ailbe, and Declan preceded Patrick, all three have been airbrushed from the Irish story in preference to the enthralling Patrick. Though his role has been overstated, Saint Patrick did nevertheless spend years maintaining the flame of Christian learning and education by travelling around Ireland preaching, taking confessions, and performing thousands of baptisms and confirmations. Patrick later became bishop of Ireland. It is believed Saint Patrick is buried in Downpatrick, County Down.

Centuries after his death, Patrick became a figure of legend. Though it was not until the 1630s when the Catholic Church added March 17, the accepted day of Patrick’s death, to the Catholic breviary as the Feast of Saint Patrick, he was never officially canonized. It was not until the 12th century when the Catholic Church adopted a formal process for canonization so Patrick’s sainthood is likely owed to popular acclaim and the consent of a local Irish bishop. As Saint Patrick’s legend grew so did myth surrounding his life. Just as trolls are a Scandinavian fabrication pulled from the cold sagas of Norse mythology, the stubborn but completely fabricated story Saint Patrick expelled snakes from Ireland has persisted as truth for centuries. Although an utterly unconvincing story, according to fable, Patrick, while dressed in formal green attire, is said to have stood on a hilltop and with the wave of his staff ejected the slimy reptiles from the country forever. The origin of the fantasy tale is attributed to British hagiographer Jocelyn of Furness, who is widely believed to written the account of snakes evicted from Ireland to symbolize evil being cast from Ireland and Patrick’s mission to rid the country of pagan or other non-Christian religious influence.

Though of lesser importance, but worth mentioning, the emerald hue long associated with Patrick was not the color originally affiliated with the Irish saint. Though green has long dominated celebrations of Saint Patrick’s Day, it was in fact a shade of blue, known as Saint Patrick blue, which was first associated with Patrick. The earliest depictions of Saint Patrick reveal him clothed in blue garments. Patrick was portrayed in artworks wearing blue vestments well into the late 15th century. However, in 1541, when King Henry VIII was crowned sovereign of Ireland, the Irish coat of arms created for the Tutor king contained a gold harp with a blue flag as a backdrop. More than two centuries later, King George III created the Order of Saint Patrick, which was also shaded in blue. As blue came to symbolize British dominance over Ireland, green grew in popularity as an emblem typifying Irish citizens seeking to escape from under the yoke of British rule. Later, during the Irish Rebellion in 1789, it became regular practice for Irish citizens to wear a green icon on lapels, in part to signify Irish nationalism and their hostility with British rulers.

Though it was not until the 17th century when March 17th was set aside to observe Saint Patrick’s good work, the first celebrations of Saint Patrick’s Day were limited to wearing crosses, ribbons or shamrocks. Surprisingly, there were few organized celebrations and those which were held to commemorate March 17 were not known for drunken merriment or imprudent behavior. The change in the character of the Saint Patrick’s Day celebrations from a day of reverence into a secular celebration with rambunctious festivities, parades, banners, and music only came with the mass immigration from Ireland to the United States. Fleeing British persecution, particularly the restrictions placed on Irish ownership of land and the erosion of voting rights, and a devastating potato famine, it is estimated between four-and-a-half to five-million Irish arrived in America in the period of 1840 to 1930. Known as the Irish diaspora, though the Irish faced a searing disdain upon their arrival in America, many were determined to re-build their lives and Irish immigrants to America established themselves in Virginia, Pennsylvania, and the Carolinas. Responding to the discrimination, many Irish began the custom of staging public celebrations of Irish heritage. As Irish immigration increased, many settled in larger, densely populated urban areas, notably Boston and New York. Many more moved inwards and discovered the Midwest was welcoming, most especially Chicago. By 1900, the Irish population in Chicago exceeded 130,000. As the Irish population grew, it was accompanied by a passionate desire to preserve Irish cultural identity.

Once the Irish settled in the enclaves of Lincoln Park, Lake View, Oakland, Hyde Park, Englewood, and Austin, the Irish built schools and churches and contributed significantly to the growth of Chicago as artisans, small business owners and laborers. As the Irish population exploded, Chicago was transformed from an oversized trading post into a manufacturing center leading the production of iron and steel, furniture, clothing, meatpacking, and lumber. Decades later, with the help of the Irish, the five-county area of northeastern Illinois would become the second largest manufacturing area in the country. Along the way, the Irish would eventually enter Chicago politics and come to control the levers of power in the Windy City.

Today, the neighborhoods in which the Irish once prevailed have shrunk, but the imprint the Irish left on Chicago has not. Now occupying the Beverly and Mount Greenwood sections on the South Side and the Norwood Park, Edgebrook, and Sauganash neighborhoods on the North Side, the veneration of Saint Patrick is now a permanent feature of Chicago’s cultural life.

While most early parades were local and modest, since the mid-50s the annual Saint Patrick’s Day Parade held downtown has matured to attract tens of thousands. In 1961, city sanitation workers discovered a green vegetable dye used to examine raw sewage in the Chicago River could be applied to tinge the river green. Beginning in 1962, a new city tradition was born as part of the growing Saint Patrick’s Day festivities. It is believed 40 pounds of the dye is needed to achieve the verdant tone the river assumes on March 17. Since its first use, the dye has been known to survive as short as a few hours or as long as two days.

While the Saint Patrick’s Day Parade has become one of the city’s premier special events, it does have rivals. On Chicago’s South Side, the annual South Side Irish Parade sponsored by the South Side Irish Parade Committee has been held annually since 1979. A staple event for South Siders, the procession marches from the intersection of 103rd Street and Western Avenue and concludes near Kennedy Park at 115th and Western. The parade’s hallmarks are a bagpipe troupe, floats, marching bands and Irish dancers. For those blasé about such displays, several nearby businesses, Sean’s Rhino Bar, Cork and Kerry, and McNally’s, share a distinction for their warm and welcoming embrace. On the other side of Chicago, the North Side, similar festivities have taken root, and on March 17th Saint Patrick’s Day is celebrated with great reverence. The group Northwest Side Irish hosts a parade which runs on North Northwest Highway between North Nagle and North Harlem Avenues. Like the South Side Irish Parade, the Northwest Side Irish Parade showcases the unfurling of the Irish flag, a bagpipe band, floats, Irish dancers, and marching bands.

Chicago celebrates Saint Patrick’s Day for many reasons. A day to salute the greatness, the contributions, and the rich heritage of Irish Americans in Chicago, it is also a day in which the Chicago Irish invite others to love what they themselves love. A deeply felt expression of Irish pride, Saint Patrick’s Day is an enduring testament to the greatest gift the Irish brought with them on their journey to Chicago: Saint Patrick’s message of love, kindness, and forbearance.