This article appeared in the Chicago Tribune digitally, late on Wednesday, September 15.

Just six aldermen turned in paperwork to the city by a Wednesday evening deadline indicating they want to decline the hike.

They are George Cardenas, 12th; Raymond Lopez, 15th; and Silvana Tabares, 23rd, all from the Southwest Side; along with Northwest Side Alds. Felix Cardona, 31st, and Gilbert Villegas, 36th; and North Side Ald. Matt Martin, 47th.

How much does your alderman make? Check our ward-by-ward breakdown here. »

For everyone else, the raises will kick in Jan. 1.

Also accepting the raise is Ald. Jim Gardiner, 45th, who apologized on the council floor Tuesday for “offensive” remarks he made about colleagues and constituents — and who, several sources have told the Tribune, is the subject of FBI inquiries about whether he withheld services to political detractors.

As the Tribune previously revealed, next year’s increase will be the biggest by percentage in over a decade. And by dollar amount, the $6,743 raise for the highest-paid aldermen will be the biggest council members have received at least since they passed an ordinance in 2006 that tied the City Council’s pay changes each year to the Consumer Price Index.

Aldermen give themselves automatic yearly raises — or salary reductions if the CPI goes down — in order to save themselves from having to take politically difficult votes periodically to boost their pay.

Lopez said it was “morally and politically wrong” to take such a big bump when residents in his ward are struggling so mightily. 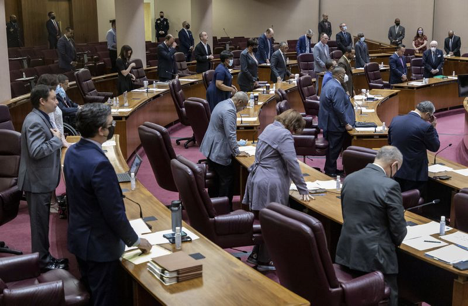 “In the last year, in the height of the pandemic, to take a raise just doesn’t make any sense,” he said. “I think people all over Chicago are going to be upset seeing aldermen take raises when they’re having such a hard time themselves. The optics just aren’t good, especially as many aldermen have had to close their offices and go to Zoom meetings. You’re getting paid more for doing less?”

All five Democratic Socialist members of the council took the 2022 raise.

Martin was the only one of the 18 members of the council’s Progressive Caucus to turn it down.

Over the years, many aldermen have accepted all the salary increases tied to inflation, which have hiked the top earners among the 50 ward representatives to a current annual salary of $123,504, up from $98,125 in 2006.

Others have declined some or all of the raises, leading to a wide range of council salaries.

The lowest-paid alderman is Marty Quinn, who represents the Southwest Side 13th Ward that’s former House Speaker Michael Madigan’s seat of power. Quinn makes $109,812, according to city records. He accepted the 2022 raise.

At the high end, 31 aldermen are paid $123,504. The other 18 council members have salaries between those poles.

The last time the CPI went up more than this for aldermanic pay purposes was in 2008, when a 6.2% increase gave the highest-paid City Council members who accepted it a $6,455 raise in 2009.

There’s no automatic pay adjustment for other city elected officials. Mayor Lori Lightfoot makes $216,210, a mayoral salary that hasn’t changed since 2006, after the council had passed a series of gradual raises in 2002 for themselves, Mayor Richard M. Daley, the city clerk and treasurer.