When Will Promises Become Actions?

Editorial: When will promises become action?

Governor after governor has failed to reform the Illinois Tollway 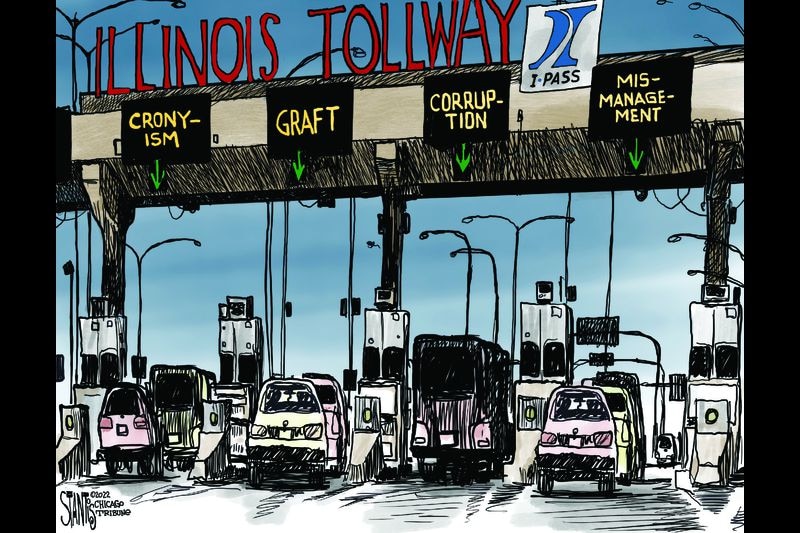 By The Editorial Board - Chicago Tribune - March 18

Reform is meaningful only when the politician pledging it actually follows through. In the case of the Illinois Tollway, governors on both sides of the aisle have vowed to reform the troubled agency dating back to the 1990s. Yet each one of them proved to Illinoisans that their promises were nothing but political blather.

Gov. J.B. Pritzker is the latest to join the line. After taking office in 2019, he appointed former Peoples Gas President Will Evans as the Tollway’s board chairman and backed former Chicago Housing Authority CEO Jose Alvarez as the agency’s executive director. “It’s a new day for the Illinois Tollway,” Pritzker said after appointing Evans. “I’m proud to usher in a new wave of transparency and accountability at this critical agency.”

New wave of transparency and accountability?

Evans embarked on a power grab in which he commandeered authority over the agency’s day-to-day operations as well as billions of dollars in contracts. That left Alvarez’s authority significantly weakened. Evans also voted on a hefty Tollway contract involving an engineering firm where he once worked, the Chicago Sun-Times reported.

Meanwhile, Alvarez made sure nine of his former CHA colleagues got well-paying jobs at the agency amounting to an overall tab of $1.3 million, the Daily Herald reported Wednesday.

Both men got their jobs after receiving strong endorsements from former ComEd lobbyist John Hooker, according to the Sun-Times. As it turns out, Hooker had his own baggage. In the fall of 2020, he joined the list of people under indictment for their alleged role in the ComEd bribery scheme that ultimately led to charges against former House Speaker Michael Madigan.

Evans stepped down in February, and Alvarez did the same last week. Pritzker appointed bank executive Dorothy Abreu to replace Evans. No one knows if this is finally the “new day” at the Illinois State Toll Highway Authority that Pritzker pledged to bring about after his ascent to the Governor’s Mansion in 2019. But history tells us we should keep our expectations on a tight leash.

As far back as the 1980s, the Tollway had a reputation for pinstripe patronage. Republican Jim Thompson was governor at the time, and the agency doled out lucrative no-bid bond deals to insiders and firms that generously donated to Big Jim’s campaign fund. In the 1990s, fellow Republican Jim Edgar took over as governor and promised to reform the agency. But the actions he took amounted to anything but reform. He hired his buddy and former campaign fundraiser, Robert Hickman, as the agency’s executive director. A bevy of conflict-of-interest scandals at the Tollway ensued, including news that an engineering firm that Hickman’s son had joined was awarded millions of dollars in Tollway contracts. Edgar ended up firing Hickman.

When Democrat Rod Blagojevich became governor, he promised Illinoisans he would, you guessed it, reform the Tollway. But under Blagojevich’s watch, business partners of the governor’s chief fundraiser, Tony Rezko, began getting the rights to run fast-food franchises at newly renovated tollway oases. The feds started an investigation into those contracts. And the 2009 indictment of Blagojevich included allegations that he tried to use a major tollway expansion to extract $500,000 in fundraising help from a highway contractor. Blago’s out of prison but don’t expect Tollway officials to look to him for reform advice anytime soon.

Under GOP Gov. Bruce Rauner, little changed at the Tollway. In 2018, a state Senate committee looked into questionable no-bid contracts and patronage at the agency. In one instance, a multimillion dollar no-bid public relations subcontract was given to a company owned by the wife of Michael McAuliffe, a longtime GOP Illinois House representative. The committee also asked about the agency’s decision to give an engineering job to Laura Durkin, a former furniture designer and the sister-in-law of House Republican leader Jim Durkin, as well as a $157 million contract awarded to a company that employed the adult children of two prominent Tollway officials and donated to charities run by two people who were on the Tollway board at the time.

Voters don’t elect Tollway leadership. But they do elect governors, and they put their trust in those governors to make the right choices about who is on the agency’s board, who chairs that board, and who is the Tollway’s executive director. And for as long as we can remember, the agency has been mired in mismanagement and scandal.

We’re not holding our breath for those freeways, even for ‘23, but we’re still waiting for the Tollway reform that governor after governor has continued to promise. If it doesn’t come, it’ll be on the shoulders of voters to hold Pritzker and the rest of Springfield accountable.